Today, we are going to go over Original Sin Ring in Path of Exile The Forbidden Sanctum League, and discuss why it’s probably one of the most overpowered Rings I’ve actually ever seen. At the beginning when GGG first showed the ring, I wasn’t really sure what to make of it, because I didn’t really know what it was and why it was going to be so good. But someone showed me a build with it, and it actually makes one of my favorite builds of all time, which is Strength Stacking Venom Gyre. Original Sin Ring effectively doubling its damage and currently this is already one of the strongest builds in the game right now.

So what Strength Stacking Venom Gyre looks like? It pretty much looks very similar to the Normal Venom Gyre. When you look at the POE Ninja, if you actually look at the highest DPS for Venom Gyre, they are all Strength Stacking Venom Gyre. Certainly I can tell you, all of these builds do go up to the hundreds of millions of DPS, and you could double this build’s damage or even more than that with just one ring, and that is what Original Sin actually does.

Now the current price of the ring is around one to two Mirror of Kalandras, but I do think that the price should go up with more poe currency, because most of the people playing Venom Gyre are pretty rich. If you look at these people they have some insane gear mostly, and they have the money to spare, so one to two Mirror of Kalandras is not really that much of a price considering you can effectively double the damage of the build. 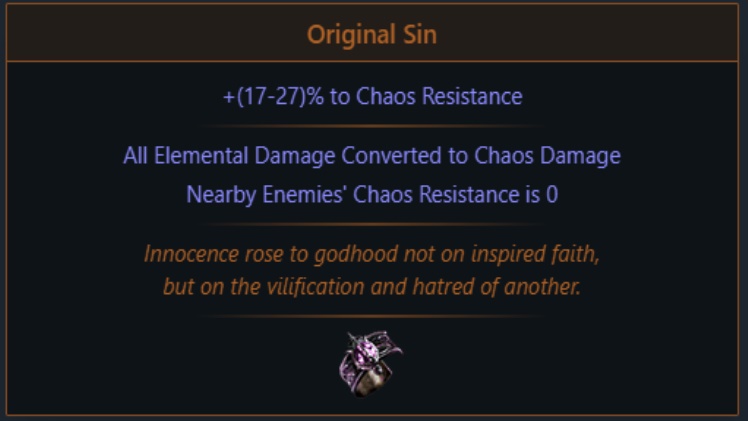 So what this Original Sin actually do? Original sin allows us to convert all of our Elemental damage to Chaos damage, and this allows you to stack Elemental damage for Replica Alberon’s Warpath, the main problem with this pair of boots is that we cannot deal non-chaos damage. Now this is going to be very important, we’ll figure out why this is so important in a little bit.

Original sin also sets nearby enemies chaos resistance to zero, so this helps out a lot, because chaos penetration is extremely difficult to get in the game, this allows us to get a lot of chaos penetration on this one mod, so both mods are extremely important.

Read More: Blight Farming Strategies You Have to Know in POE 3.20 Expansion

Reasons for Its Overpowered

Now why is it overpowered? because we can take advantage of the Strength Stacking implicit on the Weapon and Sanctified Relic. Now before, this extra fire damage would be useless, because Replica Albron’s Warpath makes this. So that we cannot deal non-chaos damage, but the Original Sin Ring converts all that extra fire damage to chaos damage, we’re pretty much effectively doubling our extra flat chaos damage.

The way we’re able to achieve this is that we have the Sanctified Relic with as two to three fire damage pretend strength, and then you can also get the synthesized implicit on the claw which is adds two to four fire damage to attacks of this weapon.

Now currently Original Sin does not really work in POB correctly, so you have to manually write in the lines. If you put Elemental damage converted to chaos damage, you can see the damage is effectively increased, so this one ring is effectively doubling our damage.

Meanwhile, this ring is crazy if we get a claw that has this implicit, now this does not even consider the extra chaos penetration you’ll receive, because the enemy’s resistance is zero. For a lot of bosses, the enemies resistance is around 30, if we delete this one to zero, we can see the damage would increase a lot.

Once you take into account the extra chaos penetration, you get now the main problem here is how are you going to get the Sanctified Relic. It does take a very long time to farm for it, but the damage potential for this build is absolutely crazy, and this is only for Venom Gyre’s outgoing projectile, doesn’t account for all Venom Gyre shotgun or any of the blaze that comes out. So this is a potential build that will have a billion plus DPS.

Personally I do think that original sin effectively doubling the damage and this is definitely one of the most overpowered build archetype combos that has existed in a while. What this means is that farming sanctums for Original Sin attempts might end up being the best poe currency farming method. I do think that if you want to try doing it you should try to make a Cold Tornado Shot build, that has very high damage and this turns Strength Stacking Venom Gyre into one of the most overpowered damage builds in the game.

Once POE Ninja starts working, and that Path of building can correctly do the damage for Venom Gyre, we will witness the highest damage numbers that pretty much have never seen before for Venom Gyre. if I told you that you could get this number to billions, you would think that I were crazy or lying, but the damage potential is definitely there, and this is the highest that we can potentially push Venom Gyre via proper currency.

However, I don’t think that this is going to be common, because the Original Sin is not going to be around since Sanctum is not core. But I do know that this build is probably very out of reach for most people, because let’s face it – not many of us have one or two Mirror of Kalandras to afford this item, the top priority is to buy poe currency a lot. But I do think that this is once in a league build that we could all get to try out, and even if you can’t try it out, it’s cool to know that this combo exists, because I never thought in my wildest dreams. I would see that this damage could be pushed this high with this Original Sin combo.

Why You Should Choose Vograce Custom Wood Pin Badges

If you’re looking for a unique way to recognize your employees, look no further than Vograce Custom wood pins!...

Sci-Fi 3D art is a popular and powerful medium...
Games

What You Need to Know About Online Gambling

If you have the desire to try an online...
Games

Online Slot Gacor casinos can offer a number of...
Games

How often have you had to choose between playing...
About Us